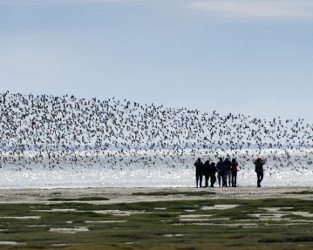 Conservation isn’t easy, even at the best of times. And when the animal you are trying to help migrates 30,000 km each year, from one remote location to the next, it takes decades of work by many people to piece together its life cycle, identify risks, and try to solve the problems. The clock is ticking. There is a real chance that populations of shorebirds – some of the longest-distance migrants – could go extinct within decades.
The Red Knot is one example. An icon of seashores worldwide, it has one of the longest migrations of any bird. Red Knots are the centrepiece of festivals, the subject of an award-winning book, and the focus of hundreds of scientific papers. But all this attention is not stemming the rapid decline of the subspecies Calidris canutus rufa, which breeds in the Canadian Arctic and migrates to three regions on the Atlantic Flyway: the southeastern United States and Caribbean coasts; the Maranhao coastline of northeastern Brazil; and the southernmost coasts of Argentina and Chile.
Many individuals and organizations are linking efforts along the flyway to reverse this population’s nosedive. Manomet’s Western Hemisphere Shorebird Reserve Network (WHSRN) program is training communities and establishing better governance at the knots’ most important Atlantic and Pacific Flyway staging places. Environment and Climate Change Canada is studying the breeding population in the Arctic, and – together with Bird Studies Canada, the Cree Nation, and others – establishing protections for James Bay as a shorebird staging haven. Conserve Wildlife Foundation of New Jersey and New Jersey Audubon have spearheaded efforts in Delaware Bay to recover the horseshoe crab population, upon which hungry migrating knots depend as a source of energy-rich eggs.
In South America, biologists are studying shorebird use of estuaries and saltpans in Suriname and French Guiana, and BirdLife Partners SAVE Brasil and Aves Argentinas, the International Conservation Fund of Canada, and Fundacion Inalafquen, are monitoring and protecting the places shorebirds use most in Brazil and Argentina.
This collaborative spirit, and generous funding from the National Fish and Wildlife Foundation, recently united a team of Canadians, Chileans, and Americans at Bahia Lomas in Chile (the southern end of the Atlantic Flyway). In January 2018, we completed two weeks of intensive fieldwork designed to better understand how Red Knots and other shorebirds use this huge intertidal bay. The work of Canadian Wildlife Service biologist Guy Morrison and others has shown that the majority of the rufa Red Knot population winters here, but has crashed by 75% since 2000. This year, for the first time, the number of Red Knots wintering at Bahia Lomas dipped below 10,000.
Working with Centro Bahia Lomas (a research centre at Universidad Santo Tomas), Bird Studies Canada’s Migration Program Manager Stu Mackenzie oversaw the set-up of five Motus automated radio telemetry receivers around the bay. The team then caught and attached nanotag radio transmitters to about 80 Red Knots and a small number of Hudsonian Godwits. The tags emit pulses that are picked up by the receivers about every 10 seconds, providing detailed information on what the birds are doing.
There are two main reasons for tracking the knots and godwits at the bay:

Thanks to years of good detective work, and help from the Motus Wildlife Tracking System, we now know that the horseshoe crab eggs in Delaware Bay are probably the single most important factor in determining whether endangered rufa Red Knots are in good enough condition to migrate, breed, and survive the Arctic summer. We also know that this is not the only issue impacting the rufa subspecies, or the species as a whole. A different population of the Red Knot that breeds in the Russian Arctic is already responding to climate change by producing smaller offspring with shorter bills in warmer years, potentially due to malnutrition in early life. This has consequences in their tropical wintering grounds in West Africa, where they are less likely to survive because they are unable to reach enough of the highest quality food.
We must act swiftly with the information we have in places like Delaware Bay, and soon at Bahia Lomas. We should also be as vigilant as we can with tools like the Motus Wildlife Tracking System to identify additional factors driving the loss of some of the world’s most awe-inspiring creatures. We urgently need to establish more radio telemetry receivers and support on-the-ground efforts at just a few places along the South American coastline to complete the flyway network of monitoring receivers at major shorebird stopovers.
Are you interested in being part of this exciting and critical work for birds? We’d love to hear from you. Get involved by donating, adopting a station, or becoming a collaborator. You can get in touch with us at motus@birdscanada.org. With your support, we can continue to develop one of the world’s largest collaborative research and conservation efforts.
Thank you for helping to make this remarkable initiative possible.