In British Columbia, four incredible bird species at risk have been keeping our team busy this spring and summer: the Western Screech-Owl, Long-billed Curlew, Marbled Murrelet, and Black Swift. Each species requires its own type of survey method, but the overall goal is the same: to try to better understand the decline of their populations to inform conservation actions in the province.

Our first bird under the spotlight is the Western Screech-Owl, a small – not much taller than a standard pair of binoculars – and secretive owl inhabiting forests of the West Coast. You can identify this owl most readily by its short series of accelerating and high-pitched toots. The coastal subspecies (kennicottii) is particularly threatened by habitat loss and predation by the locally invasive Barred Owls. On Vancouver Island, we have been studying its habitat associations, using both evening call-playback surveys, and monitoring by Acoustic Recording Units (ARUs) during their breeding season (in February-April). Analysis of acoustic data is promising and will enable us to better understand their use of old-growth forests on the island. We are proud to partner with the Pacific Megascops Research Alliance for this critical research. To learn more about this project, visit their website. 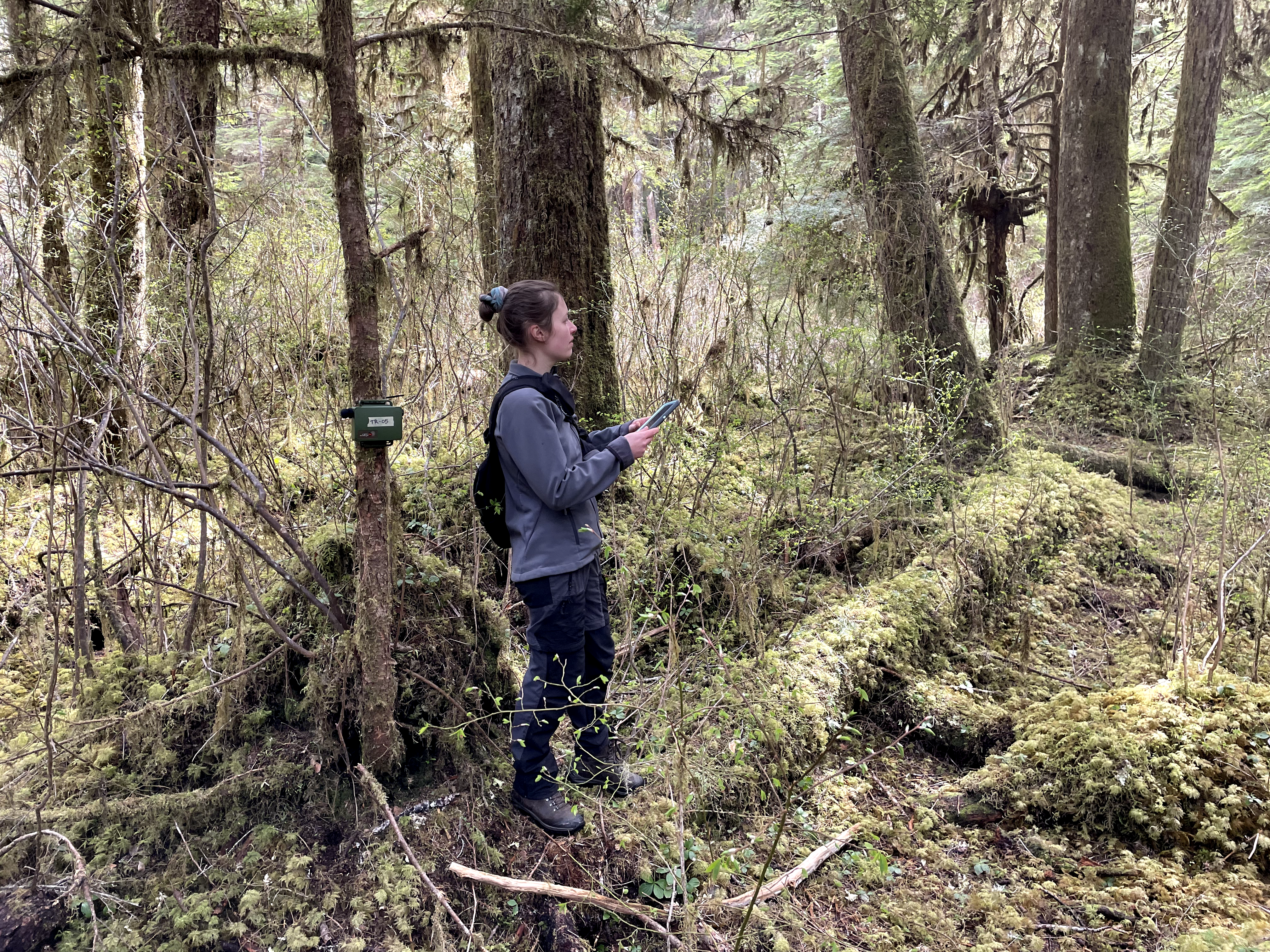 The second species is the Long-billed Curlew. This large shorebird nests in our grasslands, – where it is known for its vocal courtship displays! The loss of native prairie habitat is the major cause of the current decline of its Canadian populations. In order to re-assess the status of this bird of Special Concern, we need to estimate the size of its population, notably in British Columbia. To that end, in 2022, we launched a province-wide volunteer-based Long-billed Survey consisting of roadside point count surveys along 30-km routes from the end of April to early May. At each point count location, volunteers count the number of curlews they have seen or heard and track the different individuals during five minutes. Overall, more than 150 volunteers surveyed 1600 point count locations and found 268 curlews in total, representing an average density of 0.34 curlew/km2 across the province! To read more details about this survey and the 2022 report, please visit this page. 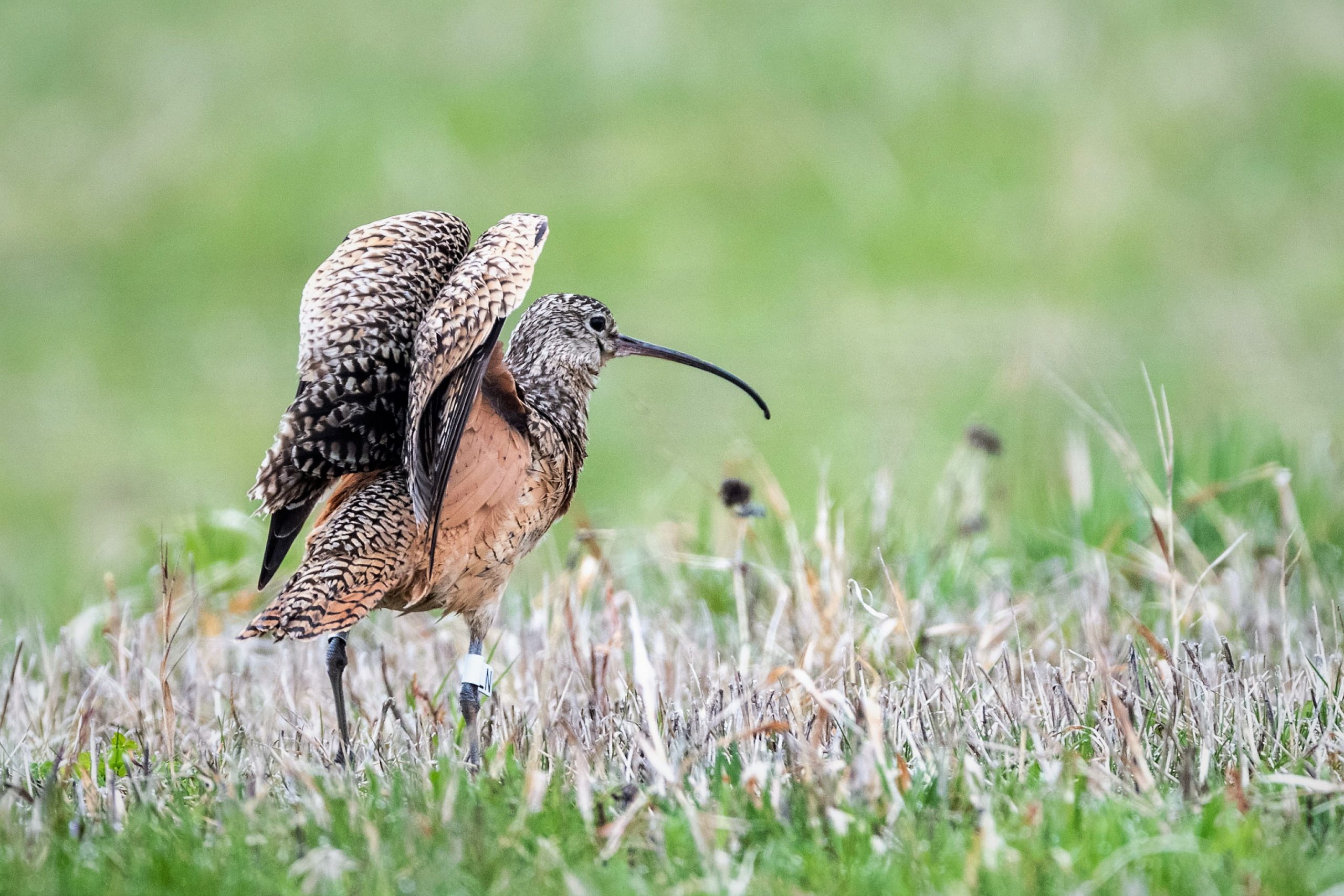 Our third species of focus is the emblematic Marbled Murrelet, a seabird that lives almost all year long on the water but nests high in large old-growth trees, where it lays one egg on a big cushion of moss. As such, the primary threat it is facing is thought to be logging of old-growth forests throughout its range. To monitor this species’ populations in BC, we work in close collaboration with First Nations in order to determine long-term population trends and to find nesting sites to enhance habitat protection. As this bird is poorly monitored from land, we use at-sea transect surveys, where we systematically follow the shoreline from a boat and count individual birds. Radar surveys are also a primary method used in the province. A highlight from our recent trip in early June in the Desolation Sound area, on the traditional lands of the Tla’amin Nation: We found 68 murrelets on a single survey morning, and many more are inhabiting the quiet waters of these fjords! To learn more about this Threatened bird, you can listen to an upcoming interview with Dr. David Bradley on The Warblers podcast.

Last but not least, one of the most mysterious bird species of our country: the Endangered Black Swift. It is part of the group of birds called aerial insectivores that are particularly sensitive to the global loss of insects and, in the case of Black Swift, climate change. Very little is known about this species; they nest in inaccessible canyons, mostly around waterfalls, where they build cryptic nests on a cliff face and they have low rates of nest attendance, making them very difficult to track! In order to find new nesting sites in the province and monitor their breeding activity at individual sites, we launched a pilot project in 2022. It involves trained technicians or experienced birders doing three site-occupancy surveys at suitable waterfalls over the summer (mid-June to early September), and nest searching in the case of species detection. If you are curious about the Black Swift or want to know how you can help, you can watch the recording of our webinar. 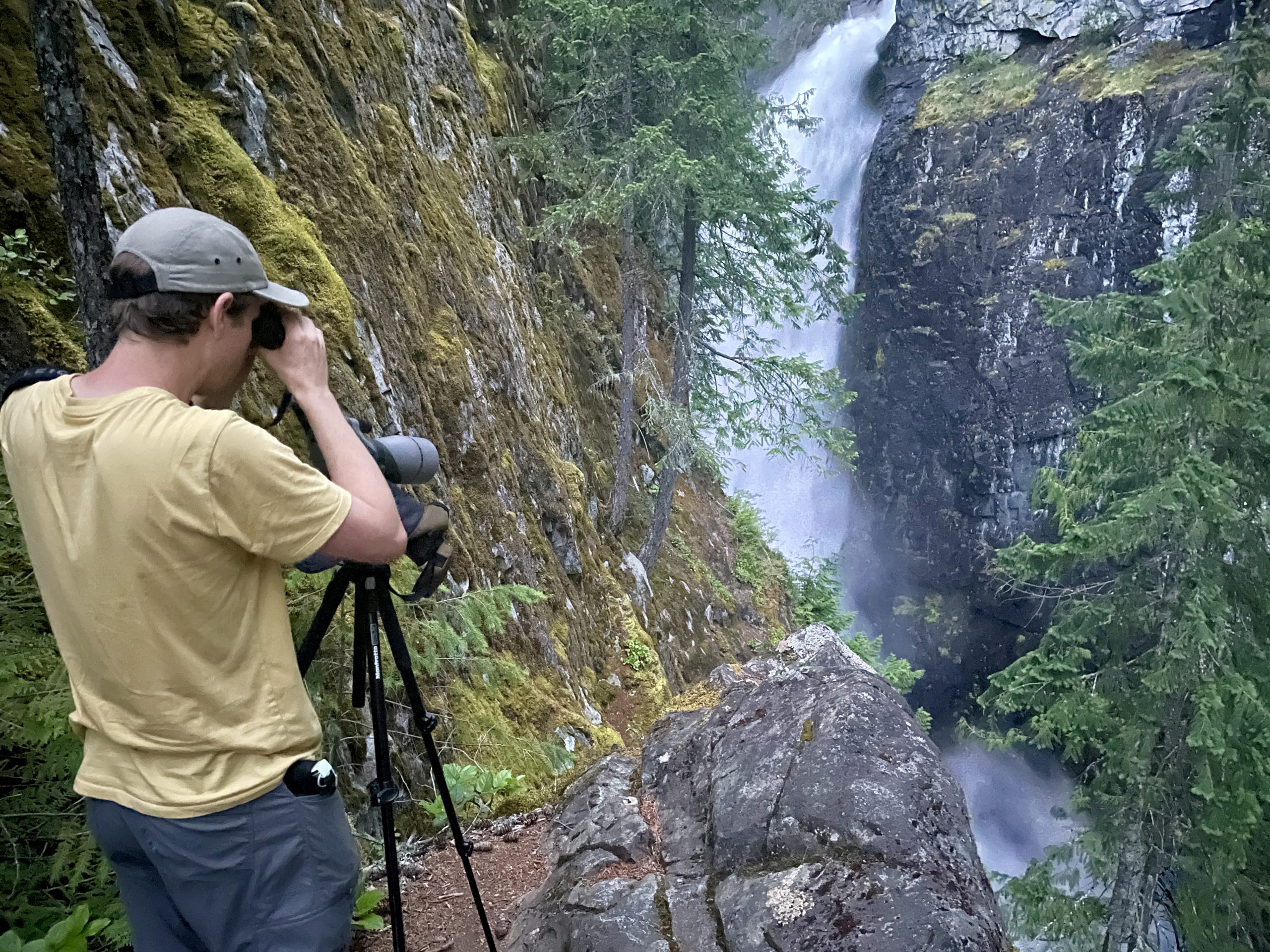 Site-occupancy survey in the early morning at a waterfall site in the Squamish Valley Photo: Rémi Torrenta