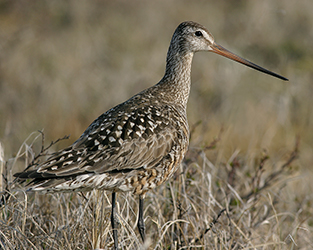 At its April meeting in St. John’s, NL, the Committee on the Status of Endangered Wildlife in Canada (COSEWIC) assessed the status of 19 species, including one bird – the Hudsonian Godwit.
There are three subpopulations of Hudsonian Godwit, breeding in western Alaska, the Mackenzie Delta at the northwest end of the Northwest Territories, and in the Hudson Bay Lowlands of Manitoba and Ontario. Individuals from all these regions undertake long-distance migrations to wintering grounds in Argentina or Chile, fueling up in late summer at key stopover sites, most notably several lakes in Saskatchewan and along James Bay.
The Hudsonian Godwit is monitored most effectively on its wintering grounds, where surveys suggest an overall 44% decline in numbers over the past three generations. The most recent population estimate is approximately 41,000 mature individuals. Hudsonian Godwits face threats at all stages of their annual cycle, including climate change and overgrazing by geese in the Arctic, loss of wetland habitat at staging sites in the United States and South America, and disturbance of wintering habitat by increasing levels of human development and activity. In light of this, the Hudsonian Godwit was assessed as “Threatened” (“likely to become an endangered if nothing is done to reverse the factors leading to its extirpation or extinction”).
A summary of the most recent status assessments of Canada’s wildlife can be viewed on the COSEWIC website.
The Committee on the Status of Endangered Wildlife in Canada (COSEWIC) is an independent advisory panel to the Minister of Environment and Climate Change Canada. COSEWIC assesses the status of wildlife species and makes recommendations, which the government considers in determining which species receive legal protection under Canada’s Species at Risk Act.