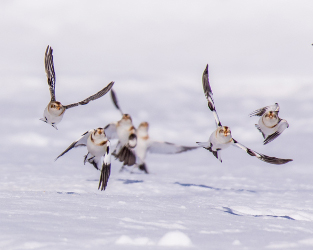 It was another recordbreaking year for the Great Backyard Bird Count. The final 2018 GBBC results are in!
Participants in 155 countries around the globe recorded 6310 species.  A whopping 176,905 checklists were submitted. Canada recorded 251 species and made a stellar contribution with 14,008 checklists! (Note: All numbers are current as of 14 March 2018, but may change as checklists continue to be submitted).
The United States topped the list for the number of checklists submitted with 108,921, followed by Canada’s 14,008, India with 13,276, Australia with 1872, and Spain with 1452. Ranked by the number of bird species observed, Colombia came out on top with 996 species. Ecuador followed with 904 species, then Brazil with 847, India with 832, and Mexico with 780.
Once again, Northern Cardinal was the species observed on the greatest number of checklists during the count. Dark-eyed Junco and Mourning Dove rounded out the top three. The species observed in the greatest numbers was the Snow Goose, with nearly 5 million individuals reported!
Here in Canada, the famous Mistle Thrush (the first of its species known to visit North America) continued to make appearances in Miramichi, NB over the bird count weekend. Higher-than-average numbers of Red Crossbills were detected in eastern Canada, and Snowy Owls delighted birders across the country’s southerly regions. In the west, Rocky Mountain birds, including Steller’s Jay and Mountain Chickadee, were more evident than usual at lower elevations.
Check out the GBBC 2018 Summary for more details!
You can use the “Explore a Region” tool to see the numbers of checklists and species reported in your province or county, or to view maps of species distributions. And don’t miss the fantastic images from the count on the photo contest page.
We received some remarkable entries to the 2018 Bird Studies Canada Great Backyard Bird Count Story Contest, and the winners have been selected! Congratulations to Deryck Robertson, who was awarded first place by our judges for his story “One ‘Lifer’ Plus Three Family Outings Makes One Great Bird Count.” Deryck will receive a Bird Studies Canada membership and a National Geographic field guide! Honourable mentions were also awarded to Travis Muir, Reika Kumagai, and Rob Mueller for their excellent submissions. Thank you to everyone who entered. We hope you all enjoy reading the winning stories!
Thank you also to all bird count participants for helping create this year’s historic snapshot of the world’s bird populations. The Great Backyard Bird Count would not be possible without so many of you taking the time to watch birds and share your observations. See you next year for the 22nd annual Great Backyard Bird Count from February 15-18, 2019!
The GBBC is a joint project of the Cornell Lab of Ornithology and the National Audubon Society with partner Bird Studies Canada, and is supported in Canada by Wild Birds Unlimited.
If you enjoyed the Great Backyard Bird Count and are interested in more Citizen Science activities to pursue at other times of year, you might want to consider the Canadian Lakes Loon Survey. It involves a modest time investment from June to August, and is a great way to appreciate and help loons on any lake in Canada. To learn more or register, please contact Kathy Jones (volunteer@birdscanada.org).