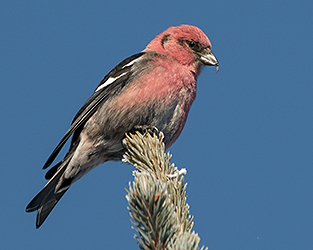 With great pleasure, the Saskatchewan Breeding Bird Atlas team announces the online release of the first atlas maps. These maps were created with information collected during the first field season (2017) of this five-year atlas project. The project’s goal is to document the distribution and relative abundance of breeding bird populations in the province. We’re excited to share the results of our eventful first year with you!
To illustrate progress, our team has developed two types of maps: general statistics maps and breeding evidence maps. General statistics maps show the number of hours of survey effort, the number of point counts completed, and the number of species observed per square. Breeding evidence maps illustrate where each species was observed, beginning to paint the picture of its current distribution in the province. During the breeding season, these maps will be updated every two weeks, with intermittent updates occurring during the non-breeding season.
In addition to benchmarking progress, the maps reveal intriguing highlights and surprises from the first year of the atlas.
A rare breeding event for White-winged Crossbills was captured in the southern portion of the province at the very beginning of 2017. In January, birders in the south noticed White-winged Crossbills behaving suspiciously amidst a bumper crop of spruce cones. These hardy nomads travel in flocks in search of spruce seeds; if a substantial crop of cones is located, crossbills may settle in to breed at nearly any time of year. By mid-February, nest-building behaviours were observed in Regina, Saskatoon, and Elrose, with more instances of confirmed breeding recorded in late winter and spring. We were incredibly fortunate to have had keen observers on the lookout so early on – otherwise, this infrequent event could easily have been missed! 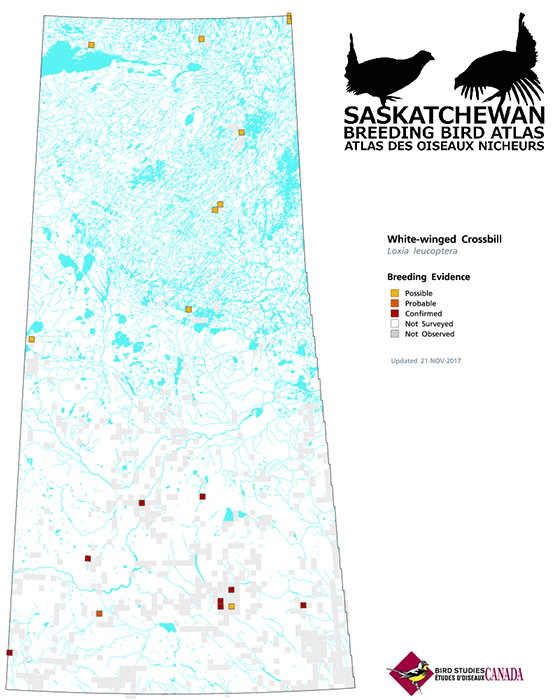 Other highlights included an out-of-range Black-throated Blue Warbler observed singing northwest of Saskatoon, a singing Sage Thrasher in suitable habitat, and confirmed breeding for Black-necked Stilt. Orchard Orioles were detected in more locations than expected. Common Ravens appeared to be continuing their return to former haunts, expanding out of the parkland and onto the plains, with breeding confirmed in the Regina area.
In the extreme northeastern part of the province, atlassers braved bears and hordes of biting flies during three remote floatplane excursions organized by project partners at Environment and Climate Change Canada. Some great northern birds were encountered on these trips, including Surf Scoter, Arctic Tern, Gray-cheeked Thrush, Bohemian Waxwing, White-crowned Sparrow, Harris’s Sparrow, Rusty Blackbird, and both Common and Hoary redpolls.
A huge thank-you to all who made the first atlassing season a success. We hope the release of these maps will inspire more birdwatchers to join the Saskatchewan Breeding Bird Atlas effort, and encourage our incredible volunteers to keep getting outdoors and contributing observations to the project. We can’t do this without you!
To learn more about the project and view the maps, please visit the Saskatchewan Breeding Bird Atlas website.