Cute but Cryptic: The American Woodcock 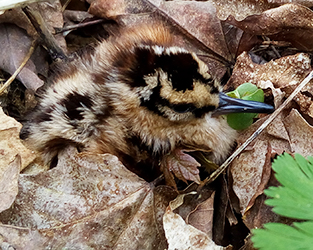 I may be biased, but I think American Woodcocks are unique in their “cuteness,” with large eyes, a stocky little body, and a large bill that makes them look a little top-heavy. Their chicks remind me of fuzzy checkerboards on stilts. Their walk and “sky dance” are a joy to watch. They are by far one of my favourite bird species.
But, on the forest floor, they blend into the leaves. Their cryptic colouration, small size, and preference for areas with dense vegetation makes them difficult to monitor. You are far more likely to hear them than see them. The American Woodcock is not considered a Species at Risk in Canada, but it’s important to keep our common birds common. This is a harvested species, and population size estimates are essential for effective woodcock management and ensuring the long-term viability of the population. This is where the American Woodcock Singing-Ground Survey comes in.
The American Woodcock Survey is a long-standing tradition in Ontario, where local Citizen Scientists have been surveying routes since 1968. The purpose of this survey is to monitor the breeding populations of this unique shorebird. The annual results guide woodcock management programs across eastern North America. The data collected have been used in several ways, such as to detect long term trends of the species, to develop population and habitat goals for the American Woodcock Conservation Plan, and to guide U.S. harvesting regulations.
The survey takes advantage of the male woodcock’s conspicuous breeding call, which sounds like “peent” (audio clip source: U.S. Fish and Wildlife Service). During the woodcock breeding season in early spring, males perform courtship displays, calling on the ground and performing “sky dancing” flight displays at dawn and dusk. During this period, Citizen Scientists spend one evening “running” one of 1500 survey transects (routes) located across eastern North America. During their run, each participant or group stops at 10 locations, listens for two minutes at each, and counts all “peent”-ing males that they hear.
In 2010, Bird Studies Canada began delivering the American Woodcock Singing-Ground Survey on behalf of the survey’s Ontario and Canadian Partners: Ontario Ministry of Natural Resources and Forestry and Environment and Climate Change Canada Change. Since then, we (staff and Citizen Scientists) have provided data on a total of 870 routes with a minimum of 1100 volunteer hours. The 2019 season is no exception – we had well over 100 Citizen Scientist teams participating and data were returned on 87 Ontario located routes.
The U.S. Fish and Wildlife Service has already published the 2019 trends in its annual American Woodcock status report. In Ontario, the population decline is significant and comparable to last year, with a decrease of 2.24% over 10 years in the number of singing males per route, and a decrease of 1.32% over 50+ years. But a picture tells so much more. Here, Figure 1 shows the Ontario and Central region population (between the Mississippi and Atlantic Flyways) indices since 1968, and it is clear that the negative population trend is considerable and continuing in Ontario. 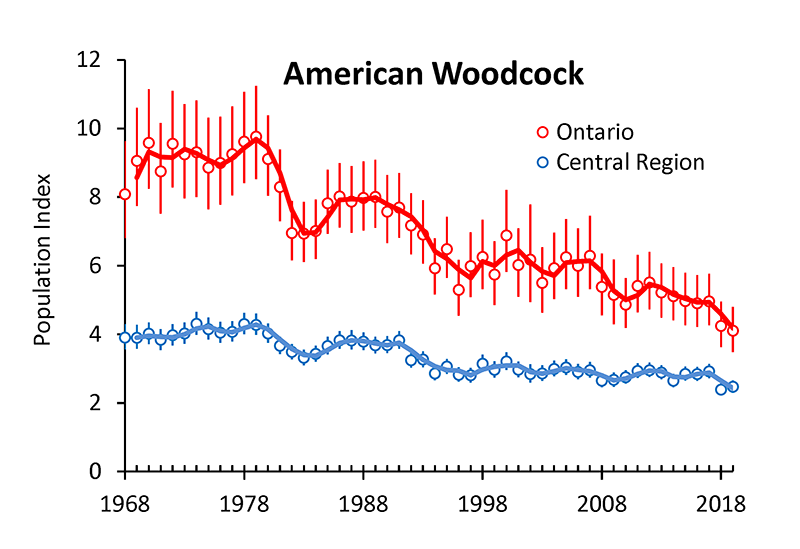 How do we help this species? Like so many of our shorebirds, its needs and threats are complex. But, the American Woodcock Timber Management Plan makes it clear that the biggest negative impact to this species is loss of early successional habitat. Thus managing our environment to provide a diverse array of habitats would be beneficial to this species and to many others. I would also recommend that you review Bird Studies Canada’s Top Six Ways to Help Birds – actions that would support woodcock populations in the long run and also help us keep our other common birds common.
I would like to give a special thank-you to the Ontario-based Citizen Scientists who take the time to survey American Woodcocks. The U.S. Fish and Wildlife Service states in their latest report that “Ensuring that observers participate for several years on the same route would greatly enhance the quality of the results.” Many of our participants joined the program before I did and continue to survey today. New participants have come on board and are equally committed to long-term participation in the program.
But, as with all programs, people move or retire and routes do become available. If you are interested in participating please use this online form to review available routes and sign up. You can also contact me for more information: volunteer@birdscanada.org.