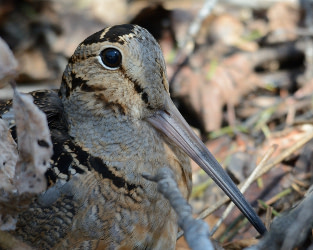 “I must be sure that, come April, there be no dearth of dancers in the sunset sky.” (Aldo Leopold, A Sand County Almanac)
In April and May, many Ontario Citizen Scientists start their spring birding by listening for and counting “peent”-ing American Woodcocks around sunset. These volunteers are part of a large U.S. Fish and Wildlife Service program that monitors the American Woodcock population in eastern North America. About 800 roadside routes across 25 states and provinces are surveyed annually, including more than 90 routes in Ontario.
The data collected are reported in the American Woodcock Population Status report and are also readily available for download. The 2017 report shows that the number of woodcocks in Ontario has declined significantly since 1968 (-0.85% change in population level per year), and that the rate of decline has increased over the last 10 years (-2.1% change in population level per year).
To give you a visual perspective on how American Woodcock populations are doing in the province, Dr. Doug Tozer, Bird Studies Canada’s Ontario Program Scientist, graphed the population indices for Ontario and for the Central Management Region. The Central Management Region is bounded by the Atlantic and Mississippi Flyways, and includes Ontario. On a positive note, the graph clearly shows that, in most years, the population index in Ontario is nearly double the index for the region as a whole. But, of far greater concern is the steep decline in the Ontario population index over the past 10 years as compared to a considerably more stable trend for the Central Management Region overall.
It is very clear that Ontario is an important component of the American Woodcock breeding range. Furthermore, these data highlight the importance of regular monitoring and conservation actions to ensure that we continue to hear and see this delightful early spring migrant.
You can learn more about the Ontario component of the American Woodcock Singing Ground Survey on Bird Studies Canada’s program webpage. Many thanks to all volunteers and coordinators with the survey, the Ontario Ministry of Natural Resources and Forestry, and Environment and Climate Change Canada. 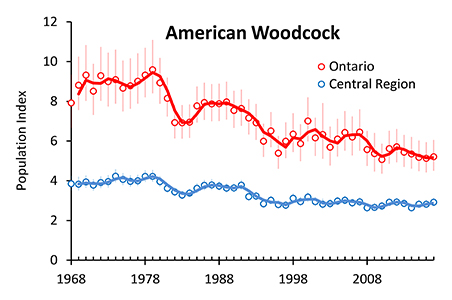 Figure 1: Annual American Woodcock breeding population indices (singing males per route) from the Singing Ground Survey, 1968-2017, as estimated using hierarchical modelling. The error bars represent the 95% credible interval of the estimate for the Ontario portion of the survey.