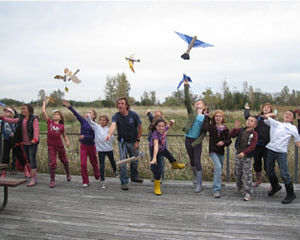 12 May 2017 (Toronto, Ontario) – This summer, Torontonians will travel great distances to spend time in nature. But some of Ontario’s most amazing wildlife can also be found within the city limits. Toronto is home to over 290 different species of birds annually, millions of which descend upon the city’s parks, waterways, and urban neighbourhoods each spring. This year, 16 of the city’s leading conservation organizations are coming together to promote and celebrate the city’s incredible bird life. Over the next two weeks, from May 12-28, festivals and events will be held across the city.
Events – Events have something for everyone and range from theatrical presentations to guided bird walks to children’s programs and all-day bird festivals. The goal is to introduce hundreds of Torontonians to urban bird life. A full list of events is available at www.torontobirdweek.ca.

Online – The Toronto Bird Celebration is supported by a dedicated website www.torontobirdweek.ca . Here you’ll find a running tally of the birds observed daily; named the 150 for the 150 (our goal is to communally observe 150 different bird species in honour of Canada’s 150th birthday). Also online is the quiz, “Which Toronto Bird Are You,” a full calendar of events, and resources such as a multilingual Map Guide to the Birds of Toronto.
Why a Toronto Celebration?
Around the world, cities are being recognized for their important role in sustaining ecosystems. In addition, it has been clearly demonstrated that urban biodiversity is critical to city people’s health and well-being. With most Canadians living in cities, it is crucial that we increase the public’s understanding and appreciation of urban nature, for the benefit of human and wildlife city dwellers alike.
Toronto is a wonderfully diverse bird habitat. Located where two of the great North American bird migration routes meet (the Atlantic and Mississippi Flyways), the city supports a large proportion of Canada’s bird biodiversity. Over 290 bird species, including some of Canada’s most rare and at-risk birds, make Toronto their home for part of the year. Several million individual birds depend on the city’s wetlands, parks, ravines, human-built structures, and gardens annually. Further, the city boasts many bird biodiversity hotspots and a globally designated Important Bird Area. These wild birds enrich Toronto’s natural environments with their bright colours and beautiful songs and also provide critical ecosystem services such as pest control, pollination, and seed dispersal. The Toronto Bird Celebration will celebrate the city’s amazing diversity, all the while raising Torontonians’ awareness of the important role that birds and nature play in our urban environments.
“Many of the threats that bird species face, such as window collisions and development, are directly related to our urban lifestyle. Birds will only be conserved if we value them as integral parts of our urban neighbourhoods and ecosystems. If we do, it will be a “win-win” because both birds and humans will benefit from conserving our urban green spaces.”
– Becky Stewart, Ontario Program Manager, Bird Studies Canada
Part of Canada 150
Birds are deeply ingrained in our Canadian identity, from our baseball team to our dollar coin. The Toronto Bird Celebration is part of Canada150, celebrating Canada through birds.
“Birds are eye-catching parts of any landscape; drawing our attention, our ears and our hearts. They are also important icons in society used to represent nature—featured on money, stamps and in music and visual arts. This vital cultural connection is protected under the Migratory Birds Convention.”
– Garry Donaldson, Biologist, Environment and Climate Change Canada’s Canadian Wildlife Service
Bird Studies Canada