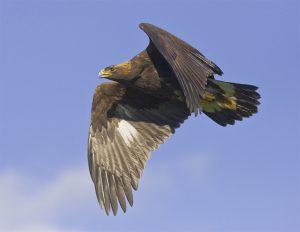 The Golden Eagle is a large, dark-brown bird of prey with long, broad wings.  Adults are almost entirely dark brown with a golden rear crown, nape, sides of neck and grey bars on their tail.  While this species can be confused with an immature Bald Eagle, Golden Eagles have much less white with only grey bars on their tail and grey patches on the underside of their wings.

As one of the largest, fastest, and most nimble eagles in North America, this raptor is able to target much larger prey than others. The Golden Eagle’s main source of food includes rabbits, ground squirrels and prairie dogs, but larger animals such as wild ungulates and domestic livestock are also a notable food source. The size of these birds is not only useful for hunting, but also for fighting off bears and coyotes in order to protect food or their young.

While the Golden Eagle can be found across North America they are the most common in the west where they live in open and semi-open country often near mountains.

Although Golden Eagle conservation status is of low concern in North America, humans are responsible for 70% of deaths. Between 1966 and 2015 their population has been stable with an estimated global breeding population of 300, 000 of which 35% is in the U.S. and 15% is in Canada.